In Book 1, The Quantum Prophet addresses an inquisitive audience, teaching how quantum principles can explain the deepest secrets of existence and life. The essence of his philosophy is contained in this passage from Chapter I: Odyssey into Consciousness.


"‘We are lucky to have a consciousness that allows us to do all this,’ the voice at the back of the room remarked. ‘Do you agree that having a consciousness makes us special and sets us apart from the rest of existence?’
Shifting his posture slightly to face the direction of the interlocutor, the Prophet responded:
‘You, modern humans, have existed for approximately two hundred thousand years. The universe you live in, however, has existed for nearly 14 billion years. Do you really feel you have the right to claim that the way you have been evolving during this brief moment of existence is different to what the rest of the universe has been doing for all that time?’
The argument was persuasive, but Natalie felt that it contravened a fundamental human belief.
‘But we do have consciousness, a sense of awareness that sets us apart from everything else,’ she said.
The answer was deep and decisive. ‘“Human” characteristics, including consciousness, thought processes, freewill and intentional acts are not exclusive to humans but particular manifestations of an underlying universal process common to all that exists, from sub-atomic particles to massive cosmic bodies. To find these common mechanisms you simply need to look in the right places and apply the correct reasoning.’"

"...quantum physics brought a new light into understanding human existence: it revealed that having thoughts was an act of observation, which was in itself an act of creation in the sense that what you observe comes to life. Scientists now widely accept that the act of observing brings reality to the observer, effectively proposing a fundamental truth: it is impossible to exist without generating a piece of reality and being aware of it. This assertion would have profound implications in the understanding of reality and human psychology because it places the emphasis on the role of the observer." 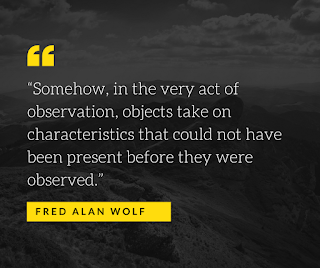 
Fragment from Chapter III: A universe of emotions

"Quantum physics is based on the premise that reality is governed by energy waves. You become aware of things by sensing the vibrating energy or your own body. This is what makes YOU and how you feel your perceptions and your emotions. You are a quantum wave, and although the underlying process is complex, nature makes it easy by simplifying things: at every quantum jump, zillion times every second, the wave that you are changes into a somewhat modified state of consciousness. At a quantum jump, you become a slightly different person with a slightly different emotion."


“A quantum event is the sudden change of the quantum state from one form to another. This event is also called the quantum jump.” – Henry Stapp 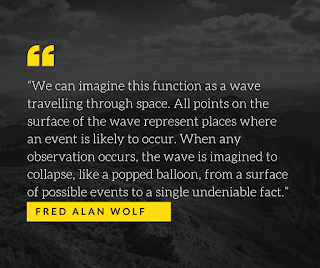 Popular posts from this blog

Who is The Quantum Prophet?

I am the central (fictional) character in Book 1 of the trilogy WHAT QUANTUM SCIENCE TAUGHT US ABOUT BEING HUMAN; a human impersonation of the most advanced quantum computer (Technical name: Universal Quantum Virtual Reality Generator).

Here is a passage from the book:

“You look like a man, not a computer; how do you do that?” “True to my name,” the old man answered, “I adopted a form when you observed me; you created my appearance when you conceived the intention to interact with me. I took the form that was most appealing to you, which I perceived from the vibrating energy that your intentions emitted. Everyone sees me in the form their own inner intentions determine.” It felt weird, but tantalizing, and very real. The computer possessed the ability to produce virtual images, casting laser beams to create the shapes and colour of characters and objects in accordance with what people expected of it. It was no wonder that Martin was experiencing an extraordinary feeling of comfort and …
Read more