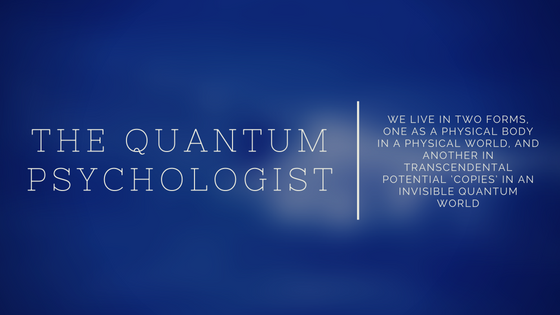 Fred Hollins (Fictional name) is a renowned Quantum Psychologist. In an interview with his publisher, he explains that our human attributes, including intelligence, free-will, and feelings are in reality essential mechanisms common to all that exist. To understand our human condition we need to identify these underlying processes, and quantum science provides us with the means. He shows how we live in two forms, one as a physical body in a physical world, and another in transcendental potential ‘copies’ in an invisible quantum world. Then he surprises us with what may sound as science fiction, except that it isn’t; with our thoughts we change our past.

Here are some segments of the conversation:

THE QUANTUM PSYCHOLOGIST: ‘When you look at your body what you perceive is a physical structure composed of smaller parts, all the way down to their sub-atomic particles. But what is there beyond this point? The answer is virtually unanimously accepted in the scientific world: waves of vibrating energy. At this super miniscule level everything exhibits as energy, and thus this is what a person really is when reduced to the bare essentials: a bundle of energy.’

INTERVIEWER: ‘But when I look at myself in the mirror I only see a physical body.’

THE QUANTUM PSYCHOLOGIST: ‘That’s because you, as everything physical, manifest in two forms, as matter and as immaterial energy. This was one of the most significant scientific findings of modern times, thanks to the works of the French physicist and Nobel Laureate Louis De Broglie. In 1924 De Broglie discovered that physical particles and energy waves are in reality one and the same, two sides of the same coin as it were, and that everything we perceive, including a human body, exhibits in both states.’

INTERVIEWER: ‘Why can I sense my physical body but not its ethereal state?

THE QUANTUM PSYCHOLOGIST: ‘Because physical senses can only capture what moves below the speed of light; the ethereal world lies beyond this threshold, outside the boundaries of your bodily receptors. At the speed of light, particles cease to behave as molecules and adopt a fully intangible wave function state; that is, pure energy.’

THE INTERVIEWER: ‘It is difficult to imagine how I can exist in many copies. Where are these other copies of me?

THE QUANTUM PSYCHOLOGIST: ‘They are in what physicists call “the wavefunction world of probabilities”. These potential copies are options that you can assemble into physical forms. You bring one of these copies into a physical reality when, through your thoughts, you send vibrating energy. Fred Alan Wolf, a renowned American theoretical quantum physicist, called these vibrations “offer-waves”, because with them you probe this invisible world. And you do all this in no time because time doesn’t run in this potential world.

THE INTERVIEWER: How can there be no time? 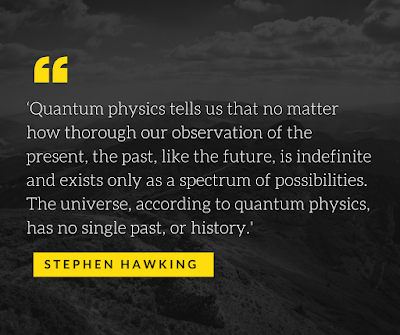 THE QUANTUM PSYCHOLOGIST: The physical reality that you perceive, including time, can only exist below the speed of light. In the potential world things move a lot faster, and time stands still. As strange as it may sound, with every thought you actually bring a new history of events, that is, a new past.


“It is our choices made now in the present that determine what the past had to have been.” - Fred Alan Wolf

THE INTERVIEWER: How can I imagine this world of potentialities?

THE QUANTUM PSYCHOLOGIST: Imagine that you live inside an ethereal soup of elements invisible to your senses. This is your existential home, and it contains absolutely everything you can experience. There is nothing in this world that does not resemble the thoughts that you have, the images that you can visualise, the feelings that you experience, the actions that you take, and the events of which you are a part, for the simple reason that you create all these things from these elements.


“An important consequence of quantum principles is that there is no such thing as empty space.” – Stephen Hawking

Popular posts from this blog

Who is The Quantum Prophet?

I am the central (fictional) character in Book 1 of the trilogy WHAT QUANTUM SCIENCE TAUGHT US ABOUT BEING HUMAN; a human impersonation of the most advanced quantum computer (Technical name: Universal Quantum Virtual Reality Generator).

Here is a passage from the book:

“You look like a man, not a computer; how do you do that?” “True to my name,” the old man answered, “I adopted a form when you observed me; you created my appearance when you conceived the intention to interact with me. I took the form that was most appealing to you, which I perceived from the vibrating energy that your intentions emitted. Everyone sees me in the form their own inner intentions determine.” It felt weird, but tantalizing, and very real. The computer possessed the ability to produce virtual images, casting laser beams to create the shapes and colour of characters and objects in accordance with what people expected of it. It was no wonder that Martin was experiencing an extraordinary feeling of comfort and …
Read more